Stuttgart/Falkenberg. The Swedish subsidiary “EnBW Sverige AB” has acquired two operating companies with seven wind farms with an installed capacity of 105 megawatts (MW) in Sweden. EnBW only recently founded its Swedish subsidiary in Falkenberg, in southern Sweden, in July of last year. It is currently constructing its own wind farm with three turbines and an output of around 11 MW in Rammarehemmet, in the municipality of Tidaholm. 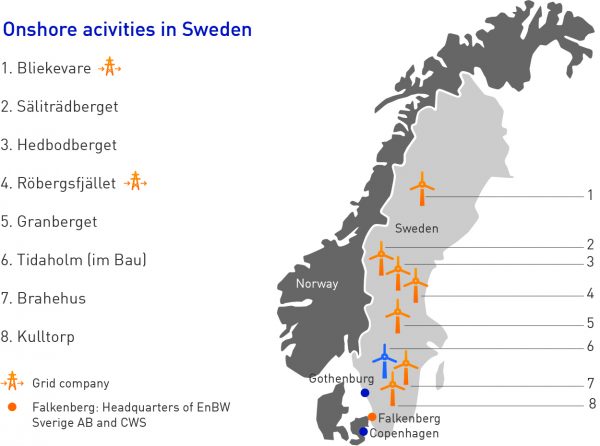 Alongside France, Sweden is the second foreign market within Europe that EnBW has selected for further growth in the area of onshore wind energy over the next few years. “We only founded our Swedish subsidiary a few months ago, and the fact that we are now already concluding the first major acquisition confirms our decision to selectively internationalise our business and shows the role we believe Sweden plays for us as a growth market. It is an important step that will help us grow here and position us as a reliable partner for the further expansion of renewable energies,” explains Dirk Güsewell, Head of Portfolio Development at EnBW.

EnBW has acquired 47 of the 51 wind turbines from the operating company “Power Wind Partners AB” (PWP), which is equally owned by the three Swedish financial investors Proventus (a privately held investment company), FAM (a wholly owned company of the Wallenberg Foundation) and the insurance company Folksam. The remaining four wind turbines come from Gnosjö Energi AB, which is owned by Folksam. The total of 51 wind turbines make up a high-yield portfolio, some are also suitable for later repowering. There are 42 wind turbines from Vestas V90-2.0, five Siemens SWT-101 turbines and four Nordex N90-2.5 currently installed. Five wind farms are located in Svealand (central Sweden), one is in Norrland and one is in the Gotaland region (southern Sweden). In addition, two grid companies have also been acquired.

EnBW has already been represented on the Scandinavian market via its subsidiary Connected Wind Services A/S (CWS) since 2016. The manufacturer-independent service provider CWS is based in Denmark and has a subsidiary with service teams in Sweden. EnBW became a significant player in the area dealing with the servicing and maintenance of wind power farms with the acquisition of CWS.

About EnBW
EnBW is one of the largest energy supply companies in Germany and Europe with a workforce of more than 21,000 employees. It supplies electricity, gas and water, as well as energy solutions and energy industry services, to around 5.5 million customers. EnBW aims to expand renewable energies to make them one of the main pillars of its business by 2020. In the onshore sector, the company has set itself the target of operating wind power farms in Germany with a total output of 1,000 megawatts by 2020.

EnBW offers planning, construction, operation, maintenance and servicing for wind turbines from one source. EnBW plans to invest more than five billion euros by 2025 in the further expansion of renewable energies. In doing so, EnBW will also focus on selective internationalisation in order to complement its core market of Germany. The target markets for offshore wind include, for example, Taiwan and the USA. Alongside Sweden, France and Turkey also play important roles in the onshore wind sector.

Connected Wind Services takes over service on 197 turbines in Denmark

As of the 9th of January Connected Wind Services took over service and surveillance of 197 turbines for a large Danish asset owner.…

Replacement of a V90 yaw ring in tough weather conditions

It was far from an ordinary task the wind turbine technicians from Connected Wind Services in Falkenberg faced, when replacing a damaged yaw…

When Swedish utility Vattenfall was facing the task of dismantling offshore wind turbines in Kalmar Sound, special expertise was required.…